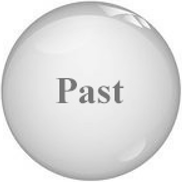 And last but certainly not least, the most common types of experiences for Type Blacks…..

Historical Shifting, as we talked about before, refers to when a helpful effect is needed in the present and the effect happens in the past (Output-Past). Changing the past in this way has often been believed to be something called Psychokinesis.

In these courses however, psychokinesis will not be explained as involving the influence of information, but rather the influence of energy and matter only. We’ll get into more of this a little later on. But for now, think of historical shifting as an experiencer in the present reaching back and changing/editing the past.