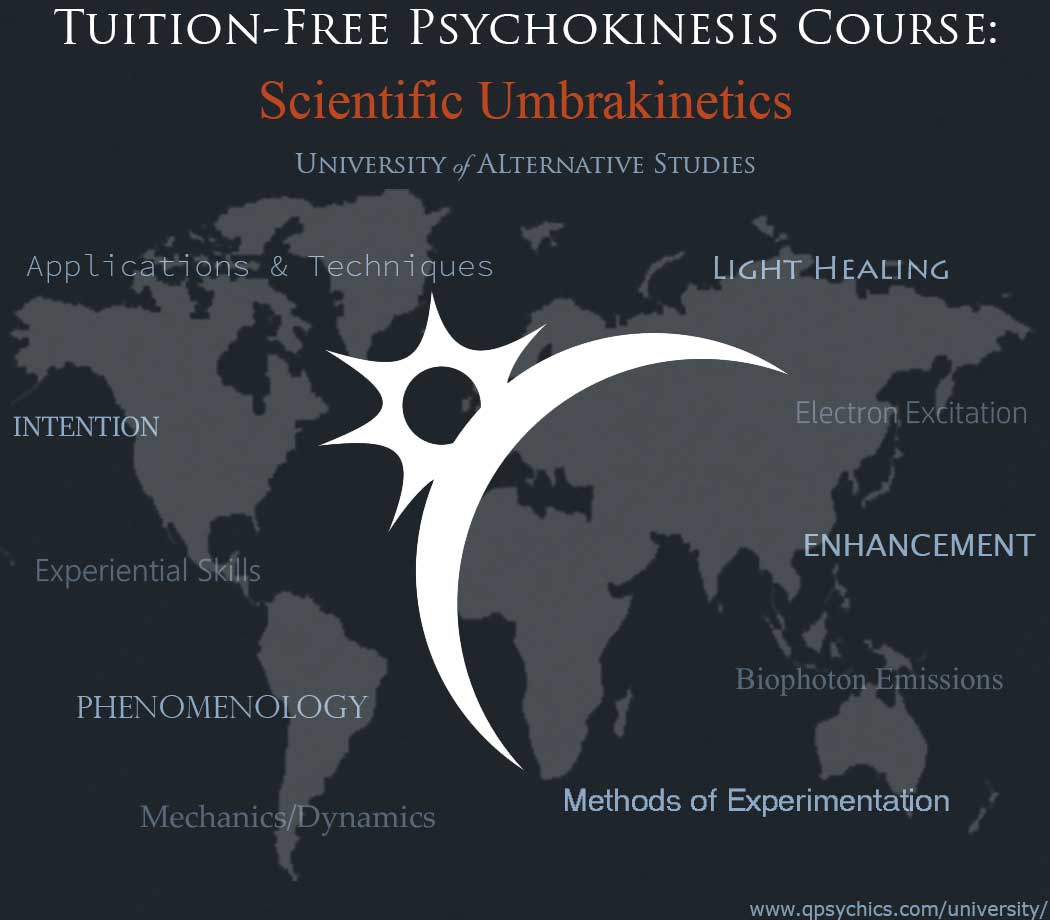 Umbrakinesis is defined in this course as the psychical influence of the electromagnetic spectrum including visible light and part of the near-infrared range. This course offers an in-depth look at Umbrakinetic influence and addresses what ideologies and misconceptions may currently be limiting practice. In addition, it addresses sub-types per limitation to identify the experients strengths and weaknesses to better identify the best course of application (practice). The course also touches on types of practical applications of use, methods of experimentation to record skill and chart enhancement, and addresses scientific measurement via devices and suggestions on technique. This course addresses popular misconceptions in regards to optical cognitive and physiological illusions, the speed of light, gravitational effects, polarization state, and propagation, and includes limitations of influence including spontaneous emission vs. pair production. This course addressees the phenomenology of pyrokinesis (i.e. what experients claim to do and experience during performance [practice]) including altered states of consciousness, a sense of connection, dissociation, playfulness, energy, knowing openness, suspension of intellect, contribution of state or energy, focused awareness, release of effort or attention, altered sense of time, investment in the outcome, positive impact, guided processes, trust in the process, and an overlapping of ESP and PK.

In addition, this course addresses commonly reported symptomatic effects in regards to experients of umbrakinesis including biophoton emission during injury, and photon absorption, it addresses techniques such as wavelength alteration, and presents an overview of biophoton emissions and fields, i.e. ultra-weak light produced by human cells in which form a major component of our bodies, whereby connecting our bodies as a whole, and connecting us to the outer environment.Addresses practical career applications in regards to umbrakinetic phenomena. (e.g. medical and alternative therapeutic, scientific, technological, and artistic). Addresses therapeutic applications including biophotonic healing, infrared light therapy, visible (colored) light therapy, biophotonic neural silencing, and photonic acupuncture (colorpuncture). Addresses experimental applications involving deconstructive and constructive interference, photon release via electron excitation, and photon annihilation via pair production with suggestions on measurement techniques and devices.

In addition, this course addresses psychological profiling in parapsychology in regards to psychokinetic performance, and addresses increased reactivity to psychical stimuli due to anxiety, psychical and Myers-Briggs personality type correlations, and pyrokinesis associated personality types. Topics include MBTI associated information, colorization (type) profiling, and enhancement elements including detailed specifications. In addition, the placebo effect is addressed along with the benefits of colorization enhancement, and enhancement via socialization. Lastly, PsiMatics is addressed, which involves psychical enhancement via geometric patterns that can result in creating measurable electrical and magnetic fields, which may happen due to a process of amplification similar to the amplification associated with symbols utilized in several forms of alternative medical treatments.