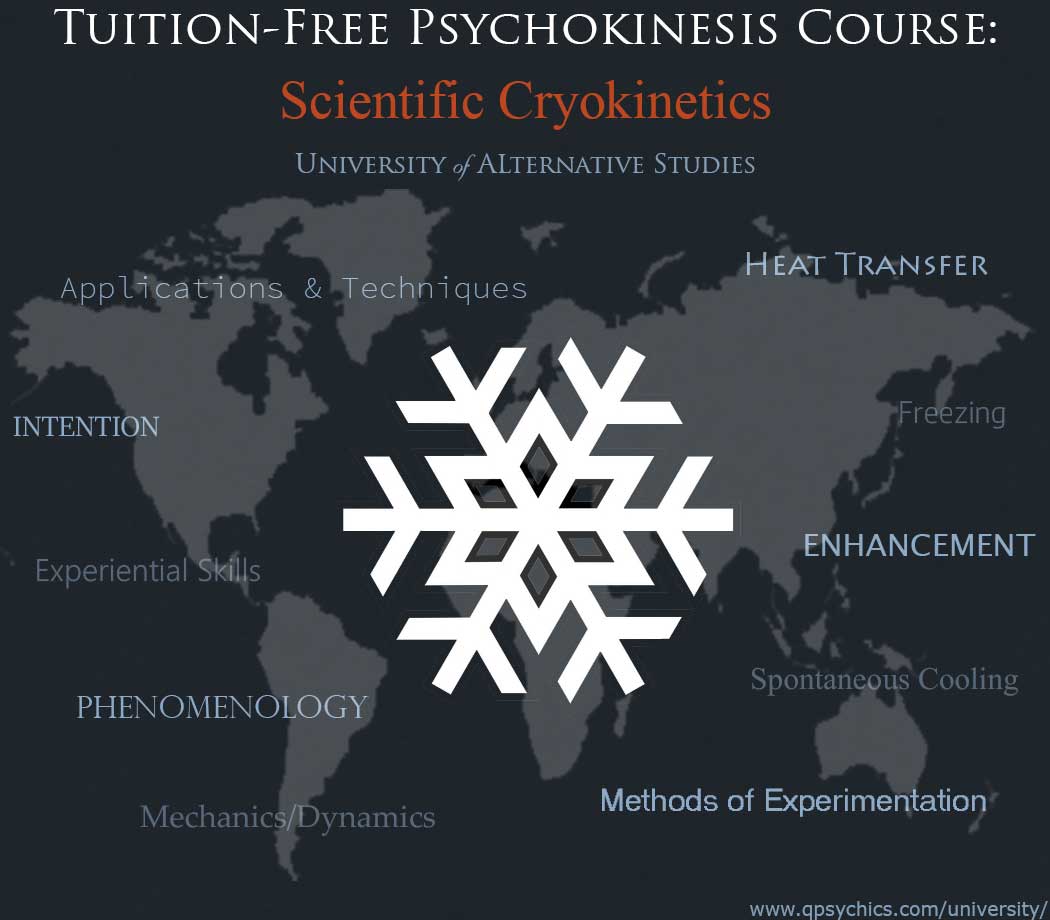 Cryokinesis is defined in this course as the psychical influence involving the deceleration of charged particles to low speeds. This course offers an in-depth look at Cryokinetic influence and addresses what ideologies and misconceptions may currently be limiting practice. In addition, it addresses sub-types per limitation to identify the experients strengths and weaknesses to better identify the best course of application (practice). The course also touches on types of practical applications of use, methods of experimentation to record skill and chart enhancement, and addresses scientific measurement via devices and suggestions on technique. This course addresses popular misconceptions in regards to mechanical and dynamical limitations including the volume of the target (object or system) that can be influence, sub-form confusion, and psychosomatic symptoms in regards to thermoception. In addition, limitations of psychokinetic influence including heat transfer vs. particle deceleration, heat conduction vs. radiation, condensation vs. frost, cooling vs. freezing, higher vs. lower temperatures, and states of matter.

This course addressees the phenomenology of pyrokinesis (i.e. what experients claim to do and experience during performance [practice]) including altered states of consciousness, a sense of connection, dissociation, playfulness, energy, knowing openness, suspension of intellect, contribution of state or energy, focused awareness, release of effort or attention, altered sense of time, investment in the outcome, positive impact, guided processes, trust in the process, and an overlapping of ESP and PK.This course also addresses commonly reported symptomatic effects in regards to experients of cryokinesis including injuries [e.g. frostnip/bite] caused by decreased heat in the hands and feet, spontaneous cooling, and spontaneous self-thermoregulation. Also addressed are practical career applications in regards to cryokinetic phenomena. (e.g. therapeutic, emergency, scientific, and philosophical), therapeutic applications such as thermo-therapeutic heat transfer, and experimental applications including indoor thermal influence, condensation, frost via cooling, freezing liquids, and freezing solids with suggestions on measurement techniques and devices.

In addition, this course addresses psychological profiling in parapsychology in regards to psychokinetic performance, and addresses increased reactivity to psychical stimuli due to anxiety, psychical and Myers-Briggs personality type correlations, and pyrokinesis associated personality types. Topics include MBTI associated information, colorization (type) profiling, and enhancement elements including detailed specifications. In addition, the placebo effect is addressed along with the benefits of colorization enhancement, and enhancement via socialization. Lastly, PsiMatics is addressed, which involves psychical enhancement via geometric patterns that can result in creating measurable electrical and magnetic fields, which may happen due to a process of amplification similar to the amplification associated with symbols utilized in several forms of alternative medical treatments.